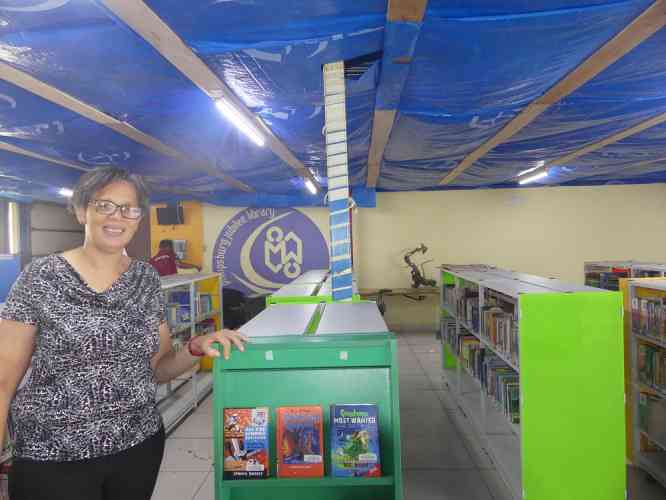 PHILIPSBURG – The action Book Storm, initiated by several librarians in the Netherlands to support the damaged Philipsburg Jubilee Library, has become a nationwide initiative that ends at the end of January. All Dutch libraries support the action through FOBID – the Forum of Dutch Libraries. At the end of December, Book storm had generated €4,850; the royal library will more than double this amount to €10,000 ($12,000) and transfer the funds to St. Maarten at the end of this month.

There have been initiatives across the Netherlands to help the library. The Bijlmer Park theater in Amsterdam organized on October 18 a fundraising evening with recitations from the work of black authors and thinkers like Maya Angelou, Winnie Mandela and Aimé Césaire. Bianca Hodge, a former librarian in Philipsburg, hosted a fundraising concert together with her husband Stanley on November 5 in Wolder.

The public library in Amsterdam donated book cases that arrived on December 5 – date of the Sinterklaas celebration in the Netherlands – with the vessel Augusta Sun in the port in St. Maarten. The Ministry of Home Affairs and Kingdom Relations funded the transport costs.

Public libraries in Rijnbrink and Ommen and several church communities donated the revenue of their book sales and collections.

Biblionef helps St. Maarten and Books4Life Tilburg also designated the Jubilee Library as the beneficiary for their annual revenue over 2017.

VBC Notaries paid for the establishment of a friends foundation that will continue with fundraising activities for the library.

With the donations from the Netherlands the library is not our of the woods yet. The building was already before Hurricane Irma severely damaged it up for replacement. Director Monique Alberts hopes that the existing plans for a new multifunctional building that would bring the library under one roof with the archeological center and the museum will get a new chance. In the meantime service at the library has been restored.

The building is more or less accessible, the internet café and the study room have been reopened and on December 21 the library hosted its successful Christmas market.

In this sense the library has an important role for the citizens of St. Maarten. In a unique cooperation with the Mental Health Foundation the library also contributes to dealing with the psychological effects of Hurricane Irma. Storyteller and social worker Guineta de Palm came from Curacao to St. Maarten to host a special program. This program stimulates children to tell about their experiences during and after the hurricane through stories, books, games and music.

It will take some time before it becomes clear how much money will be available for the construction of a new building. Donations can help the library in the execution of special programs that benefit local children in particular.

Donations are welcome until the end of the month. Use account number NL:13 INGB 0000 425131- Koninklijke Bibliotheek Den Haag with the reference Boekenstorm.

The Book Storm initiative has the support of seven different organizations in the Netherlands that include the Association of Public Libraries, the Royal Dutch Association of Information Professionals and the Royal Library in The Hague.