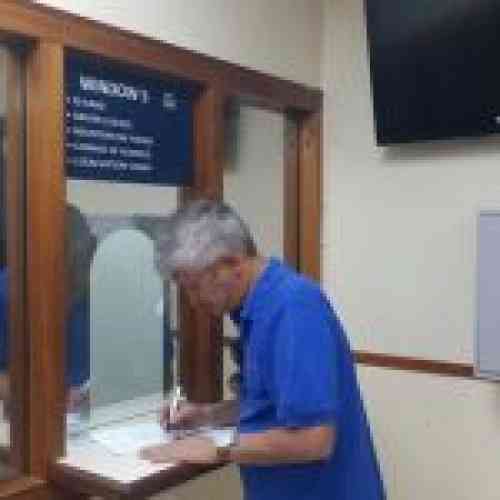 PHILIPSBURG – Endorsement Day at the former Census Office on Soualiga Boulevard was a subdued event on Monday. After all the hustle and bustle that marked Endorsement Day in 2016, the almost deserted area in front of the Census Office suggested mid-morning that many people have lost their interest in politics, politicians and especially in elections.

Earlier on the day there was some activity when the United Democrats came to town. Party leader Theo Heyliger and his second in command Sarah Wescot-Williams were among them and the UD-list easily surpassed the threshold of 142 signatures a party needs to qualify for the elections.

Of the three other parties that need endorsement, Gracita Arrindell’s People’s Progressive Alliance was struggling to get 142 signatures, while the St. Maarten Christian Party and the St. Maarten Development Movement were well on their way to hit their target. Parties that did not collect enough signatures will get an additional day to make up the difference.

Two parties do not need endorsements because they are currently represented in parliament: the National Alliance and the United St. Maarten party.

At the end of the day, the final count were as follows: UD 268, SDM 194, SMCP 189 and PPA 86 signatures. The PPA will be given another chance to get the rest of the signatures needed next week Monday at the same location.

Former Vromi-Minister Maurice Lake arrived mid-morning to endorse the UD-list. In 2015, Lake was instrumental to the fall of the UP-government when he supported a motion of no confidence together with Silvio Matser, the USp and the Democratic Party.

For the 2016 elections, Lake was a candidate on Frans Richardson’s USp, but he now admits that he made a mistake: “That party is all about openness and transparency, but when push comes to shove it is exactly the opposite,’ he said.

When Richardson knocked on his door after Hurricane Irma, saying “We have to run again.” Lake asked him if he was kidding.

Instead of staying with the USp, Lake made amends with UP-leader Theo Heyliger – “He called me after the hurricane and I manned up” – and he is now the number 23 candidate on the list of the United Democrats.

January 26, 2023
0
PHILIPSBURG:--- In celebration of International Customs Day, the World Customs Organization has dedicated 2023 to Nurturing the Next Generation: promoting a culture of knowledge-sharing and professional pride in Customs. Every year on January 26th, International Customs day celebrates the...
Read more