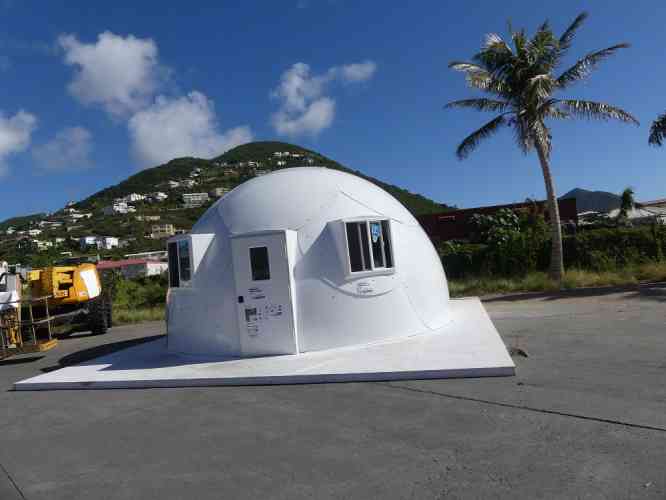 PHILIPSBURG – Hurricane Irma has inspired entrepreneurs to bring new products to the island. A prime example is the Envirodome, a portable shelter the Alaska-based company Intershelter produces. A model of the shelter can be seen on the parking lot behind Cost U Less in Philipsburg.

The shelters consist of 21 panels and can be assembled in just a couple of hours by three people; no training necessary. At a price of just over $18,600, establishing a village of fifty such shelters for currently homeless hurricane victims would cost the government less than a million dollars and house around 250 to 300 people.

Produced in Alaska’s capital Juneau, it is not surprising that the domes are shaped like an igloo. They are earthquake and hurricane resistant.

The domes are made of composites; they can be equipped with heating and cooling systems and with systems that produce potable water. Other optional extra’s are flooring, solar panels, kitchen appliances and bathroom fixtures.

It is also possible to link several domes together, thus creating a dome-city.

The domes have been approved by FEMA, the American Federal Emergency Management Agency, for use as shelters and by several states for use as homeless shelters.

According to the producer, the domes can be established as ‘portable’, thus making them fit for temporary use by natural disaster victims until their homes have been fixed.

Photo caption: The model of the Envirodome shelter on the parking lot behind Cost U Less. Photo Hilbert Haar.