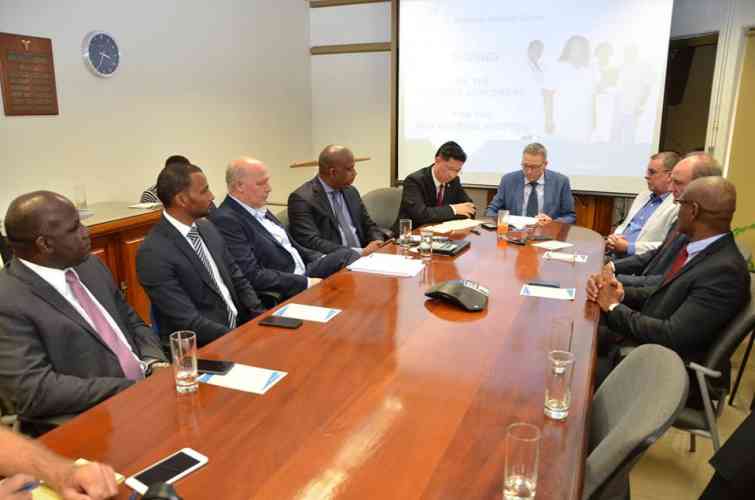 PHILIPSBURG – The timing may suggest it, but both Public Health Minister Emil Lee and Kees Klarenbeek, director of the St. Maarten Medical Center, made abundantly clear that the signing of the financing agreement for the new hospital that took place on Friday afternoon in the hospital’s conference room is not an election gimmick.

“These are hard financial commitments,” Minister Lee said. “If our financiers renege on this, they are liable for damages. We wanted to secure the progress we have made so far before the elections, so that they would not get lost.”

Asked whether he agrees that the signing ceremony is not an election gimmick, hospital director Klarenbeek said: “Absolutely. There is no politics involved here.”

SZV-director Glen Carty: “If anyone sees this as political, I say to them: there is no way we could have planned this in this way. We did not know that the government was going to fall.”

The funding for the now 145 million guilders project comes partially from St. Maarten and partially from Curacao, where financiers also signed the 100-page facility agreement on Friday afternoon.

Minister Lee said that, compared to the first (non-bid) hospital project that would have exposed SZV to a risk of 189 million guilders, that exposure has now been brought down significantly. SZV and APS split the local part of the loan between them and the rest comes from institutions in Curacao.

Klarenbeek spoke of an agreement of historic value. “The current hospital can no longer meet the needs of modern healthcare,” he said. The current building was crippled by Irma but required before that monster storm already a lot of money for maintenance. “Our objective is expanding the quality of healthcare,” Klarenbeek said.

“I am a very positive thinking person but never thought this day would ever come,” SZV-director Carty sad. “This is a very special day for St. Maarten but it is a fantastic day for SZV.”

And for good reason: currently SZV spends over 40 million guilders a year on referring patents who cannot get the healthcare they need at home to hospitals abroad. Keeping a large part of that money in the country is one of the fringe benefits of the new hospital. There is however more at stake for SZV.

Carty: “We are not a medical institution but an insurance company; we provide health insurance, but we have turned into a travel agency. We have to take care of airlift, we have to make appointments, we have to get hotels and patients do not always have a visa or a correct passport. It is a logistical nightmare and when something goes wrong, SZV gets the blame.”

“To think that patients will be able to get treatment in St. Maarten and that family will be able to see them during visiting hours, instead of seeing us, saying we need this and we need that, it is a dream coming true.”

Minister Lee commended SZV for the role it has played throughout the years in the process of planning the new hospital. “If it wasn’t for SZV starting this project, we would not be here today,” the minister said. “SZV was the only institution to put up the money to develop this project and to get it to the point where it was finance-able.”

Minister Lee described the loan agreements as “a solid investment:” the lenders will get a 6 percent return on their money.

The minister said that the Netherlands has agreed to prioritize the hospital project “and to return the wing back to the plan in an upgraded fashion.”

After Hurricane Irma hit St. Maarten, the hospital plans had to be adjusted to make the facility resistant to the likes of Hurricane Irma. That resulted in higher costs, forcing the planners to drop a wing that was part of the original plan. To finance that wing would require between $25 and $30 million and Minister Lee has lobbied with the Netherlands for a grant for this amount.

“I tell you, we are going to get the money for that wing as well,” Lee said.

That optimism is based on a project-review by the World Bank. “They looked at the project and said: you did an excellent job. That clears the way for access to the recovery funds.”

One of the conditions is that the hospital project meets the procurement requirements of the World Bank.

Construction of the new hospital can begin within five months.

Above photos by Roland Bryson.