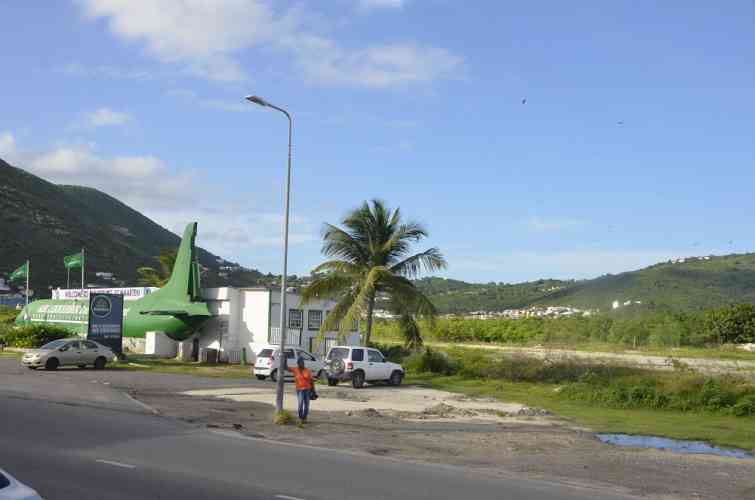 In 2002 my wife and I purchased Air Lekkerbek, the plane on the Pondfill that was one of the major touristic attractions on the island and frequented by many residents. The business was bought as a retirement investment so that we could be self-sufficient when reaching the pensionable age. This opportunity was violently ripped away from us by former Ministers of VROMI Maurice Lake and Claret Connor.

In 2010 the government decided to create ten parcels for long lease along the stretch of the ring road where Air Lekkerbek is located. When we were informed of such we proceeded to submit a written request on May 20th, 2010, to government to obtain the land. Three years we were sent back and forth by the Department of Domain Affairs as we endeavored to get a response to our request.

We finally received a response to our request when Minister William Marlin was in office. Minister Marlin awarded us a draft decree whereby it was stated that we would receive approximately 800 m2 of long lease land where the plane was located. Upon receipt of the decree we once again returned to the Department of Domain Affairs as we had to get permission to get the land measured. This is where the process completely stalled.

The staff of the department continuously had an excuse why the Cadaster office was not being provided with the necessary permission from government to measure the parcel of land. As we were not being successful with the Department of Domain Affairs and could not get the attention of the Ministers, we decided to approach the Cadaster directly. Cadaster informed us that they unfortunately could not assist us as they had to await the permission from government. Months of waiting became years and this permission was never granted.

Upon visiting the Department of Domain Affairs for the umpteenth time, we were informed by the Head of Domain Affairs and an employee that the land was now the property of the Chamber of Commerce. Upon requesting confirmation of this decision in writing and after having provided our email address, nothing was ever forthcoming in writing and to date no explanation has been given why the land was given to the Chamber of Commerce behind our backs.

We approached all former ministers Maurice Lake, Claret Conner and Angel Meyers for intervention in our case. None of these Ministers gave us any form of assistance. Instead, we were lied to and given a run around again.

Last year we approached former Minister of VROMI Christopher Emmanuel. He was shocked at the manner in which we had basically been thrown off of a property that government had issued us a draft decree for. Christopher Emmanuel began making efforts to fight the case, however unfortunately the government fell before he could finalize the process.

Many people have been asking us why Air Lekkerbek is closed and is not being repaired. No one knows that we have been put out of business by the government of St. Maarten itself. Former ministers Maurice Lake and Claret Connor were directly instrumental in taking away the possibility for two seniors to be self-sufficient and thus destroying any hope for a positive future here on this island.

We are very hurt with the entire situation and what we have had to endure. We had a sponsor who was willing to assist with a development plan that would have enhanced Air Lekkerbek. However to receive the investment we had to have the land secure. All of these plans have been destroyed by Maurice Lake and Claret Connor due to abuse of their power as ministers. They have trampled on us. They have held us back from progressing in our own country as locals.

What triggered me to write this story now is the reports in the media this week about Christopher Emmanuel giving land to locals on the Ring road. Again you have a Minister of the National Alliance giving land to locals and efforts being made to take back the land by a subsequent government, supported by the now United Democratic Party that has both Maurice Lake and Claret Connor on their slate. This shows what can happen to locals when they try to get land on this island. The land can be taken away the same as was done to us.

The public should be wary of these people who are postulating themselves on a list again. Because if they are reelected they will do the same thing to some unsuspecting local person again. Be careful with the so-called Super 8 as they have clearly shown that they are betrayers to this country. When the leader of the National Alliance stood up for this country, they pushed him aside and let the Dutch trample on him. If this had happened in another country, all of the members of parliament would have stood together to defend their country. Here they choose to fight each other.

As an advice and warning to the voters, do not elect the same people who trampled on the rights of the locals. They are asking you to vote them back in again. This is a warning not to do it.

We sympathize with Lee’s Roadside Grill as we share the same plight. Locals being put out of business in our own country by a government that clearly does not want to see the locals on this island prosper.

Above photo caption: Air Lekkerbek restaurant and the land it is located on the ring road, Pondfill. File photo.