Home Local News In support of our independent media 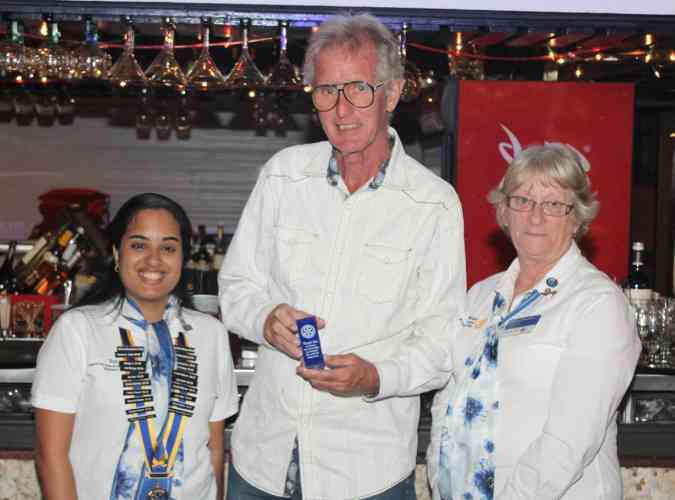 The Rotary Club Mid-Isle invited me to join in for a club meeting last Tuesday at Wasabi Charley in Simpson Bay. After having turned down quite some previous invitations due to conflicting work schedules, this time I managed to honor the invitation. After all the Rotary rituals and a nice dinner, my name was called. The club offered me a token of appreciation, which I gladly accepted from the club’s President Anjali Manek and President-elect Denise Antrobus.

I haven’t done anything special to qualify for such a honor; it was just, I think, an expression of gratitude towards publishing about Rotary-events in the now defunct Today newspaper. But that’s alright – and even more so, I thought because this gave me the opportunity to grab a microphone and address the Rotary members.

I did not use the occasion to blow my own horn – I’m a bit too shy for that. But I thought it was an excellent forum to ask attention for the importance of the independent media in St. Maarten.

The bluntest thing I remember saying was something like this: “Without independent media, St. Maarten will become a very dangerous place to live.”

If you want to get people’s attention, magnifying an issue is always a good idea; and that’s exactly what I did.

Hurricane Irma blew the Today newspaper off the face of the earth. I worked there with lots of pleasure for more than ten years. Sad as it may be, I understand and respect the business decision the newspaper’s owner took to close the place down. In his place, I’d done the same thing.

The disappearance of Today left St. Maarten with only one print-medium – my dear colleagues at the Daily Herald.

In this context it is important to note that during all the years I worked for Today, there was never an economic reason for that newspaper to exist. It was there, because its owner did not want St. Maarten to be a one-paper city. And while the situation in for instance Curacao is quite different, the Today-owner never interfered with the paper’s content. All the mistakes were mine.

With one newspaper left, stories quickly started to circulate, also in the Netherlands, that the independent media in St. Maarten are under threat. It is good to note that after the last issue of Today appeared on September 5 of last year – a rush job because I also had to secure my home against the approaching hurricane – I kept publishing online as soon as the situation allowed it.

The first stories appeared on the old website of Today; a report in September about the devastation of Orient Bay got more than 80,000 hits. Some weeks later we started with a new news site: stmaartennews.com. To this day, this is the only serious digital news alternative for the Daily Herald.

But while we are obviously competitors in a very small market, we also have a shared interest: to keep our businesses alive. And that is a huge challenge under the current market conditions, even more so for the Herald because of its huge overhead.

Editor-in-chief Gordon Snow said in an article published on Caribisch Netwerk that the company employs around 100 people. I won’t even ask readers to imagine the Herald’s monthly payroll.

To the Rotarians, I emphasized last Tuesday the importance of independent media. I told them that those media need the support from the business community.

“I am not here to beg for money,” I said. “But I do want to use this opportunity to tell you that the Herald and stmaartennews.com cannot survive without your support.”

Such a message is easy to understand but the question is of course how entrepreneurs will react to it. God knows that they have their own problems to deal with as well.

I understand that. At the same time I see that our restaurants are full (last week I could not get a table at Avantika, to name just one example) and the hotels that do have rooms charge exorbitant prices for a night. When there are cruise ships in port, Great Bay Beach is full of tourists and so are the businesses along the Boardwalk.

In other words, there is money coming in.

State Secretary Raymond Knops said this week that the media in St. Maarten do not have to count on help from the Dutch government. That sounds bad, but it isn’t: independent media should not become dependent on funding from a source they are supposed to follow in a critical manner.

Sure, at stmaartennews.com we attract subscribers. They pay an attractive price for a news outlet that is always there: on their tablets, on their smartphones and on their laptops. But media outlets cannot survive on subscriber-revenue alone. With a few exceptions around the world, advertising revenue has always been the lifeblood of print newspapers.

For digital media like stmaartennews.com the fight for advertising dollars in this already severely depressed market is even tougher because for some reason, quite some advertisers wants to see a printed publication.

To those entrepreneurs I would like to say this. Look, I am almost 68 years of age and I come from a print background. I prefer reading to watching video. But there is a new world out there, a world of people with the attention span of a mosquito, a world of people who prefer on-line to off-line and even video to text.

In other words, there is a whole new generation of not only readers but also consumers.

Stmaartennews.com wants to remain a part of that new world and I sincerely hope that the old-school printed version of the Herald stays with us as well.

Whether this will happen, depends for a large part on the preparedness of the business community to join that new era as well, by spending their advertising budgets on media outlets that are serious about the news business.

To the Rotarians who hosted me so graciously last Tuesday I want to say: thank you very much for dinner and for the token of appreciation. But are you all with me on this one?

Aftermath Hurricane Irma: Press on Sint Maarten is in danger

The end of an era