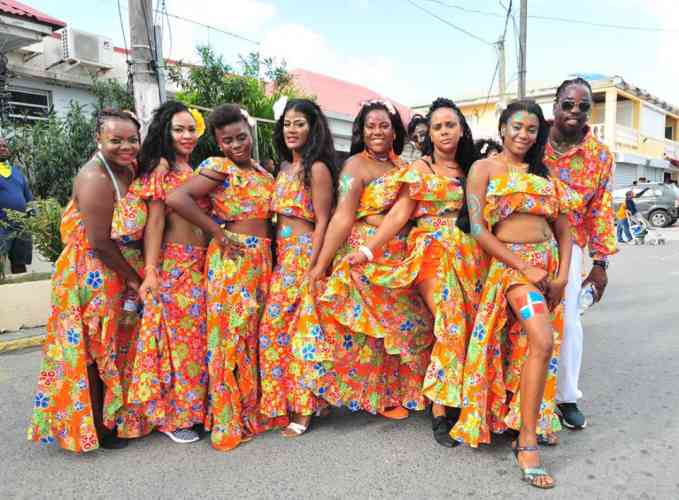 MARIGOT — The adult parade which took place on the French side of the island may have fell short of the number of participating troupes, but the eight that were present represented a cross section of the society including the Indians and the Spanish.

Unlike the kids parade which started at the Bellevue Roundabout, this one commenced at the original area in Agrement and took the same route that has been used over the years. The extremely colorful spectacle attracted thousands who took up positions along the roadway, some eager more than others to capture the unfolding scenes on their cameras and cell phones.

Perched on a portable stage at the front of the long procession was the figure of King Moumou attired in red and white and close behind was the artistic slogan of the Carnival, ‘ SXM Smile Again.’

Positioned at the top of the back seat of a light green Mustang that trailed King Moumou was the teen queen for 2017 Tasyanna Clifton wearing a dark green gown. The presence of the veteran Carnival participants Cleo Carti and Agnese Leblanc could have been described as a preview of forthcoming attractions.

But not even the brief sprinkle of rain could have dampened the spirits of those involved and those waiting to experience the thrill of Mardi Gras through the streets of Marigot. The FCDSM President Luciana Raspail had indicated during the opening of the season that the streets was the stage for display of splendor and creativity and that is what was expected.

Up next were the dancing troupe representing the Association Dominicanos, followed by the guest troupe from the Dutch side of the island, Survivors. The presence of a spanking new 2018 Hyundai Sonata, compliments of the proud sponsors Motorworld could not be missed in the line up.

The ‘Happy Crew’ presented by the Association Culturelle et Sportive de St James were next and then came the Association of Indians on St Martin all attired in traditional outfits, but only the men wore matching headpieces.

Even with the pounding music in the distance, the men still tapped rhythmically on their double-sided Dhol drums. But they were certainly maintaining their culture under the theme ‘We Culture, We Fete’ as the Gems of India.

Up next were another type of Indians, the Aztec Warriors presented by SKA under the theme ‘It’s We Bacchanale’.  It was an all ladies affair and by the outfits they wore, they were ready for a war and the leader of that group could be distinguished from the others by her head piece.

To add the Midas touch to their already menacing appearances, they all pointed their spears forward, but that did not prevented them from baring that friendly St Martin smile. However the Mardi Gras parade was not restricted to kids.

A small group representing ‘Christop’ Bugs were next, their colorful outfits were vividly displayed and from the looks on their faces, they too were happy to be involved. Creativity and the use of colors took on a whole new meaning with the appearances of the last set of troupes.

It started with the Soualiga Women Kultural Association followed by Hot N Spicy and bringing up the rear was the largest troupe of the day, Bacchanal Storm. What these troupes had in common was that they were equal to the task of competing and entertaining and the crowds loved it.

View the photos by our photo journalist Milton Pieters aka Robin online on Facebook.