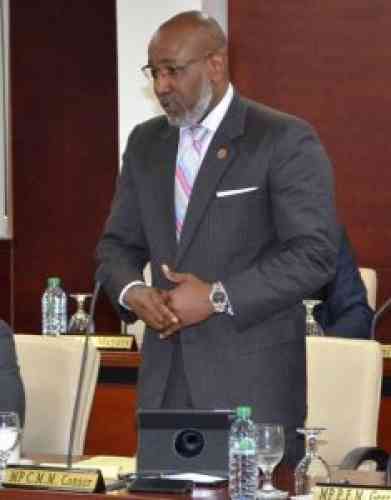 As a candidate in the upcoming election, I have observed how political candidates continue to mislead the people in great attempts just to gain political mileage. The latter is evidently the case from the article written by Fe Fernandez, in which he alluded that Air Lekkerbek’s choice to close their business was because of a decision that was taken by the government to reallocate land to the Chamber of Commerce. The article was filled with baseless innuendos and illusions. What was even more disturbing in this shameful rapport was that the person in question went as far as to levy allegations against my person.

I have been a member of the Rotary Club of St Maarten Sunrise for more than 15 years. Air Lekkerbek Restaurant was the location where we hosted our weekly breakfast meetings up until 2016. Because this was the venue for our weekly meeting, I got acquainted with Mr. Fe Hernandez. The Hernandez family at one time informed me that they requested the property on which their business was established and received a “deed” from the then Minister of VROMI, William Marlin. When inspecting the documents that were in their possession it was revealed that what was given to them was only a Ministerial Decree. Fact remains that a ministerial decree does not give ownership to a property without having the cadastral certificate of admeasurement and the deed for the property. When realizing that the family did not have the documents mentioned, I quickly explained to them the process involved to have the property transferred. Anyone who knows me knows that I operate in a professional, fair and just manner.

So to the persons who maliciously continue to misinform the people for political propaganda, allow me to educate you on the situation surrounding the Ring road and related developments. The Ring road has always been part a complete comprehensive development and as such anyone (business or otherwise) being issued land (in long-lease) must present plans that are in accordance with this development.  This was one of the conditions revealed to the Chamber of Commerce at the time when the Economic Service Center was being discussed with the government. It was with these conditions in mind that the Chamber of Commerce was able to acquire land. In addition, what was discussed with regard to the Chamber land was that the boundary of the property would not encroach on the property where Air Lekkerbek was situated.

Therefore, when a former Minister(s) feel that they can issue parcels of land on the Ring Road carelessly; without taking the overall development into consideration, is a blatant and irresponsible attempt to fool the people. The Hernandez’s family have been clearly misinformed and led to believe otherwise. It is very sad when persons are used as “poppets” for political rhetoric. It is even sadder when our political leaders for political gains blatantly aid in spreading propaganda that is untrue. Mr. Christopher Emmanuel and Mr. William Marlin should be ashamed of themselves for misleading people to believe that they have been given something; all the while making sure that they remain ill-informed and unaware about the proper procedures.

Time should be spent on explaining and educating the public on what has been government’s plans for the development of this area. It is unfortunate, to say the least that efforts are being made to thwart these plans into what may seem like a political freak show.

As I have said before, this type of decorum is not becoming of persons seeking higher and honorable office in my country.  I know that St. Maarten and its people deserve better representation than this and you will get the representation you deserve very soon!