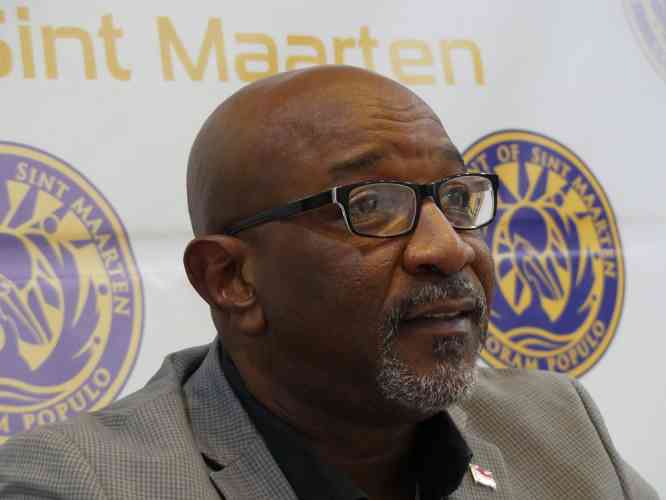 Connor hosted the press conference to counter allegations by Emmanuel and former Prime Minister Williams Marlin against a decision he took in 2015 as minister of VROMI to issue 10,000 square meter of land on the ring road to the Chamber of Commerce.

But Connor more or less ducked the question from stmaartnenews.com whether he thought that the long lease contracts Emmanuel had issued to his closest confidants ought to be voided. “That is not my decision. I don’t know the specifics,” he said. “The minister has rights and obligations and he can take decisions. He has an obligation to make decisions that are beneficial to the country and that those decisions are legal. That is for him to decide. What I want to say is this: show the public the purpose of the transfer of that land.”

Confronted with another controversial land issue – the land swap with Port de Plaisance and Tesi NV in 2015, Connor became more specific. Under Connor’s responsibility Tesi NV, a project developer that is part of the Port de Plaisance Group, obtained land in long lease on Kim Sha Beach for the construction of a 5-star hotel and casino. The government received in exchange a parcel of land near the causeway bridge for the construction of a sewage plant. The court voided this decision, based on the rules for departure policy.

Connor: “I have a different opinion about that. It was not a decision by Claret Connor only, but a decision by the Council of Ministers. I executed the decision.”

Connor questioned the way the court arrived at its decision. “If you go to court and you don’t bring the full dossier but only the documents that support your argument while I am out of government, of course that is gong to influence the decision. They had their own agenda going into court.”

Connor said that the case is on appeal. “I am sure that the facts will come out on appeal and we’ll see what the judge will say then.”

The court case however, was brought against the government by Tesi NV and the Port de Plaisance Group in an attempt to overrule a decision by Connor’s successor at VROMI, Angel Meyers, to void the lease contract. The plaintiffs had every interest in bringing everything to the table that could have won their case against the government.

The objective of Connor’s press conference was to offer some opposition to “the rhetoric that has become overbearing from the former prime minister (William Marlin) and the former minister of VROMI (Christophe Emmanuel),” Connor said.

Marlin and Emmanuel have emphasized on several occasions that Connor failed the screening for a ministerial position over perceived wrongdoing with the issuance of land in long lease to the Chamber of Commerce in 2015. “That is absolutely not true,” Connor said yesterday.

He noted that the Chamber had already asked back in 1986 for a parcel of land to construct a building, but that the government had never acted on that request. The initial request was for 900 square meters, Connor acknowledged. So why did the chamber then get 10,000 square meter?

“That land was not only for a building for the Chamber of Commerce,” Connor sad. “It was for the development of an economic service center.”

The land, located on the ring road between the spot where the old airplane of Air Lekkerbek rests and the entrance to the John Larmonie center, is to be used for accommodating small enterprises in a variety of fields – from photography and digital imagery to optical and financial services and land measurement and registry services.

Connor said that the Chamber signed a development agreement with the government and that the project is still a work in process.

Connor emphasized that when he was the executive director at the Chamber of Commerce and Maurice Lake was the minister of VROMI, they agreed that the Chamber would accept a piece of land on the ring road for the development of an economic service center. “The land I issued in 2015 was the completion of a process that started long before that time.”

In a written press statement, Connor explains his grief with the criticism that came his way: “It is astounding that with all the publications about the Chamber of Commerce land issue that anyone to this day can believe that this can be compared to the land issued in long lease by outgoing VROMI-Minister Emmanuel to entities and persons who were either not established and/or did not have land requests in.”