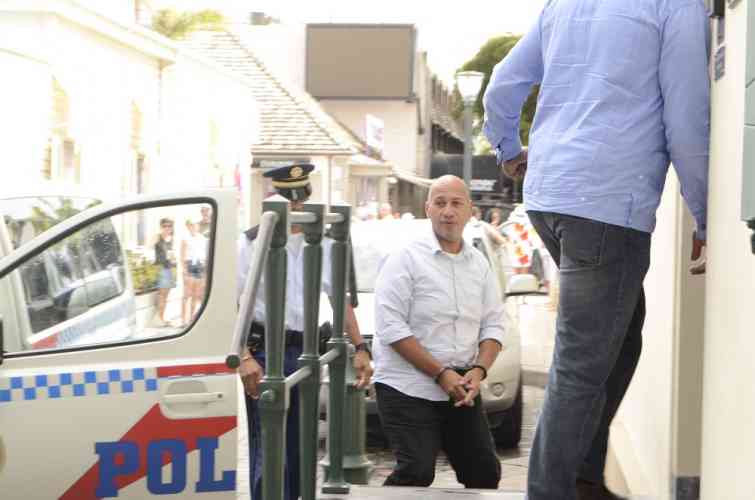 PHILIPSBURG – United St. Maarten party MP Silvio Matser has to go to jail for committing election fraud in 2014. The Court in First Instance sentenced Matser on appeal on Wednesday to 8 months of imprisonment with 2 months suspended and 2 years of probation. The court also revoked Matser’s passive voting right – the right to be elected to parliament – for five years.

The court sentenced prison director Edward Rohan to 160 days of imprisonment with 80 days suspended and 2 years of probation for providing a list of Pointe Blanche inmates who were eligible to vote in the 2014 parliamentary elections to Matser.

A third suspect, Edison Edvis Leroy Fleming was sentenced to a 6-month prison sentence with three months suspended and 2 years of probation.

All sentences are lower than the demands by the public prosecutor; the demand against Matser was 2 years of imprisonment and a 5-year ban from passive voting rights; against Rohan, the prosecutor demanded 9 months, with 3 months suspended and 3 years of probation. Fleming was facing a 6-month prison sentence.

The court acquitted Matser of membership of a criminal organization and of promising one inmate a taxi license and another inmate a street vendors license and a job.

In the weeks leading up to the parliamentary elections of August 29, 2014, Matser approached prison director Edward Rohan (see photo above), asking him how many inmates of the Pointe Blanche prison were eligible to vote. Rohan provided a list of names to Matser.

During a search of Matser’s home investigators found a letter in which Rohan asked Matser for a loan of $15,000.

“That Rohan possibly never received that money from Matser does not change the fact that he asked for the loan and that he therefore had a personal interest in the suspect (Matser – ed.),” the court ruling states.

Inmates received $100 on their prison canteen account in exchange for their vote. Rogelio Koeiman, currently detained in the United States on drugs-related charges, deposited the money.

The court furthermore established that the leader of the United People’s party UP, for which Matser was a candidate in 2014, won the highest number of votes in 19 of the 20 voting districts during the 2014 elections. But in voting district 19, the Pointe Blanche prison, most votes went to Matser.

“The defendant has been involved in buying votes; he used confidential information he obtained illegally from the interim director of the House of Detention,” the court ruling states.

The court observes furthermore that Matser’s crime targets the foundation of the parliamentary democracy, “namely that not the best or most convincing candidate is elected, but the one with the most resources.”

The court sentenced prison director Rohan for providing a list of inmates with voting rights to Matser. The court dismissed Rohan’s argument that he was unaware that he had violated confidentiality by providing the list to a third party.

Rohan’s contract stipulates that a integrity and non-disclosure declaration applies; while no such declaration could be found in his personnel file and while Rohan said he never signed anything like that, the court pointed to an article in the LMA – the rulebook for civil servants – that states that civil servants are obliged to observe confidentiality related to information they obtain in the course of their duties. The court considered proven that Rohan assisted in the process of buying votes as an accomplice and that he violated confidentiality.

“He has been an important link in a crime that targeted the foundation of parliamentary democracy,” the court ruling states.

Edeson Edvis Leroy Fleming was the chairman of the Pointe Blanche Inmates Association in 2014. Other inmates told investigators that Fleming was among those who campaigned for Matser and that he told them that Matser was prepared to pay.

“The suspect must have been convinced by or on behalf of Matser to approach inmates to vote for him in exchange for money,” the court ruling states, adding that Fleming’s contribution had been significant. “Without his efforts it would not have been possible to approach the eligible inmates.”

It is unclear how much Fleming received for his campaign-activities; his name is not on the list of inmates who received $100 on their prison canteen account.

Because the court does not consider Fleming as the main suspect, it issued a lower sentence: 6 months of imprisonment, with 3 months suspended and 2 years of probation.

Prison director Rohan and MP Matser to court on Wednesday