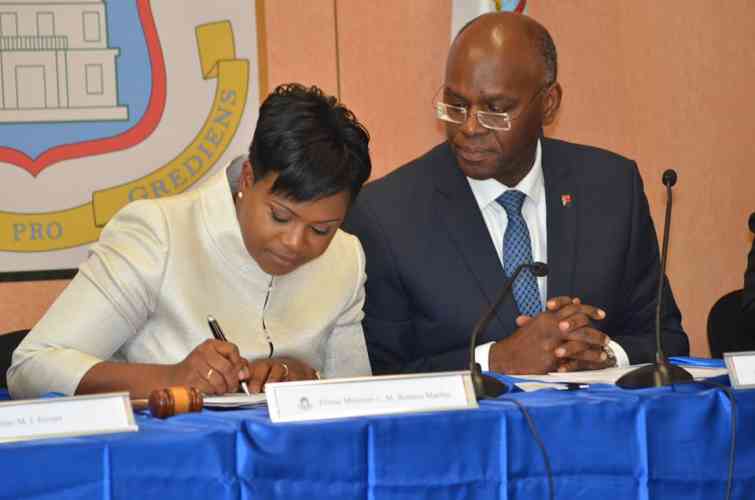 PHILIPSBURG – The new Council of Ministers was sworn in by Governor Holiday on Monday and shortly afterwards presented itself at the traditional constituting meeting at the government building on pond island on Monday morning. Missing in the lineup are a minister for economic affairs and tourism and a minister plenipotentiary.

Minister Cornelius de Weever (Justice) will take on the role of Minister of Tourism, Economic Affairs, Transport and Telecommunication until a successor for Melissa Arrindell-Doncher has been found. Nothing has been said about the appointment of a successor for Minister Plenipotentiary Henrietta Doran-York. However, Hassani Ellis, has been appointed deputy minister plenipotentiary.

“We are living at a critical moment,” Governor drs. Eugène Holiday said in a brief address at the constituting meeting. “Irma has set us back in no small way and there is quite some work to do for the rebuilding of St. Maarten. We are in this together,” he said with a reference to the preamble of the country’s Constitution.

The Council of Ministers has “an awesome responsibility,” the Governor said, noting that the new team will have to deal with furthering recovery efforts, revisiting the budget, monitoring border control and the establishment of the Integrity Chamber and, last but not least, the February 26 elections.

Interim Prime Minister Leona Marlin-Romeo announced the replacement regulation. In her absence, the Prime Minister will be replaced by Minister Emil Lee (Public Health, Social Development and Labor); if both are absent, their replacement is the eldest member of the Council of Ministers – Minister of Finance Mike Ferrier.

While the appointment of a minister of Tourism, Economic Affairs, Transport and Telecommunication is still pending, Minister De Weever will fill that position for the time being; he will also replace the to be appointed minister in his or her absence.

Top photo caption: Prime Minister Leona Marlin-Romeo with Governor Eugene B. Holiday signing during the constituting meeting of the new Council of Ministers on Monday, January 15th, 2018, in the Government Administration Building on Pond Island. Photo by Roland Bryson.