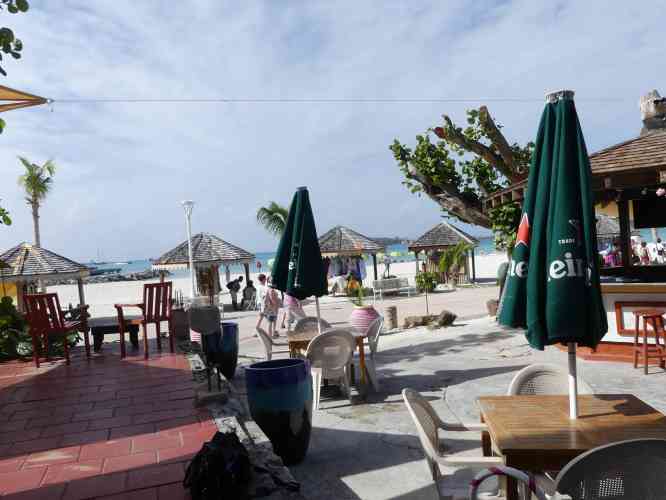 PHILIPSBURG – The government has to remove the six kiosks it placed on Great Bay Beach in front of the Pasanggrahan Hotel before June 6, the Court in First Instance ruled on Friday.

The hotel took the country to court because the kiosks block the view of its guests on the beach.

Minister of Tourism and Economic Affairs Melissa Arrindel-Doncher stated on December 15 in a public announcement that she had designated three locations on Great Bay Beach as market places for a period of 6 months. The locations are in front of the Pasanggrahan Hotel, in front of the Walter Plantz Square and in front of the Honky Tonk Bar.

In the same announcement the minister stated that the locations behind the courthouse, next to the old fire station and next to the RBC Bank will no longer be designated as market places.

That announcement has in the meantime been undermined because street vendors have massively returned to the locations, using tents to replace their demolished kiosks.

This policy bans construction on the beach “that restricts normal use of the beach for others.”

Furthermore, the policy states: “The standpoint of the island government is that construction works on the beach are annoying and disfiguring to the surroundings.”

The government placed the six kiosks in front of the Pasanggrahan Hotel between December 5 and 7 of last year.

An announcement about the beach market places the ministry distributed via Facebook does not mention that the kiosks will only be for six months on the beach. The announcement was also not placed in the National Gazette.

Pasanggrahan’s attorneys Monique Hofman-Ruigrok and Peter Bruns asked the court to order the removal of the kiosks within 24 hours after the verdict and to impose a penalty of $10,000 per day for non-compliance.

The hotel reproaches the ministry for acting wrongfully. “The kiosks hinder the view (….) and there is nuisance and sound pollution due to increased traffic and public.”

The hotel also fears “knowing the governance culture in St. Maarten” that the temporary placement of the kiosks will become permanent. The plaintiff also pointed to the lack of a building permit.

The court ruled that the hotel had not substantiated that it will suffer damages from the kiosks during the next couple of months. Repairs to the damaged part of the hotel will begin this month.

However, once the hotel is fully operational again, the court finds it plausible that it will suffer damages from the presence of the kiosks.

The ministry did not consult the hotel before it decided on the location of the kiosks. That violates the principles of good governance, the court ruling states.

The evaluation that is to take place after six months assesses only whether the future location of the kiosks is ready. If this is not the case, the kiosks will remain on the beach.

“This attitude of the government boils down to randomness,” the ruling states. That is wrongful towards the hotel, especially because the country cannot state whether it will manage to have the alternative location ready for use.

The court sees no reason to intervene before June 6 because the hotel has not made plausible that it will be suffering damages up to that date.

Before June 6 the kiosks must be removed to prevent further damages to the hotel, the court ruled.

Photo caption: The kiosks hinder view of the beach from the Pasanggrahan Hotel. Photo Hilbert Haar.

Photo caption: Vendors have massively returned to their old location behind the courthouse. Photo Hilbert Haar.