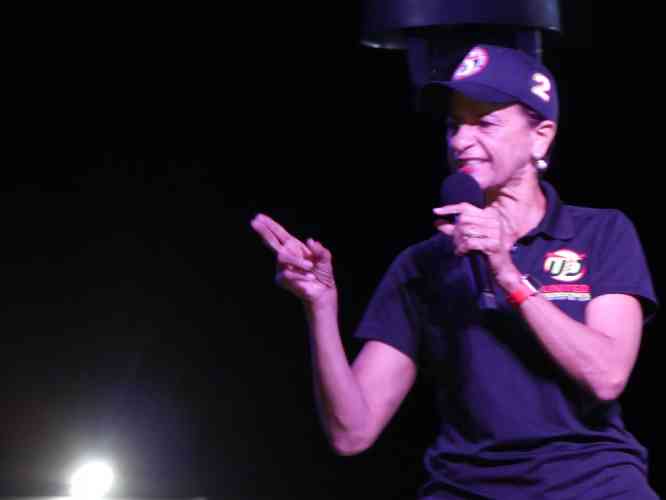 PHILIPSBURG – The last rallies before Mondays’ parliamentary elections for the three main parties took place at different locations. The National Alliance was on its traditional stomping grounds in St. Peters, the United St. Maarten party need the causeway bridge roundabout in Cole Bay and the United Democrats (UD) on the ring road in Philipsburg.

The turnout at the UD-rally was more than reasonable and reports came in that the interest at the NA and USp-rallies was significantly less.

In a boisterous atmosphere that is the hallmark of all political rallies, the 23 candidates of the United Democrats all showed up for one last appeal to the electorate. As the night wore on, the event was several times interrupted with light rainfall and with power cuts.

The message of the candidates was a familiar one: a call to give the UD – arguably the party with the strongest list of candidates – a majority of at least eight seats in the new parliament that will be installed on April 1.

What stood out: MP Tamara Leonard’s passionate plea to tackle corruption and this unforgettable line from candidate number 5, MP Chanel Brownbill: “If they lock me up and throw away the key, I will smile.”

Finance Minister Mike Ferrier stood in the crowd and just shook his head.

Maybe that was because earlier Prime Minister Leona Marlin-Romeo had made clear earlier that her government was not giving the National Detective Agency reason for any investigations into the members of her cabinet – a none too subtle reference to the recent arrest of United St. Maarten party leader Frans Richardson on suspicion of bribery, vote buying and tax fraud.

The public prosecutor’s office has charged Brownbill however with tax evasion. He is one of the seven suspects in the so-called Emerald-case; several companies, among them Brownbill’s Country Construction, have invoiced the harbor over the years for hundreds of thousands of dollars and never reported this revenue for income and turnover tax to the tax inspectorate.

It was a long wait for the party supporters: the meeting was scheduled to end at midnight but it took until after 1.30 a.m. in the morning before party leader Theo Heyliger made his appearance as the number 1 on the UD-list. Just then the rain became a bit more intense and that was reason for quite some people to call it a day, figuring that by then they must have heard it all.