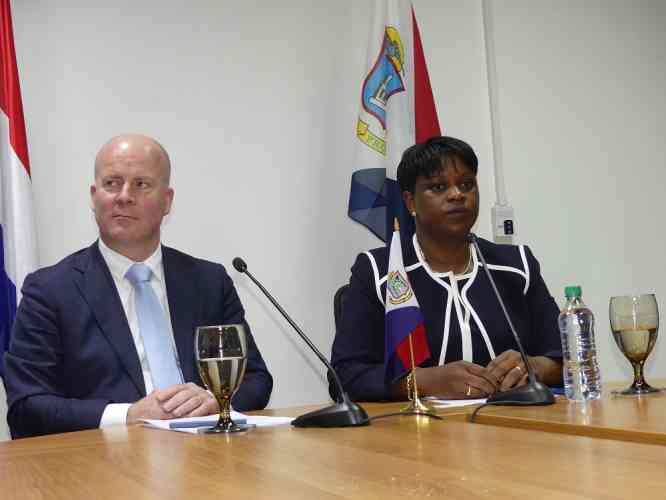 State Secretary Raymond Knops said on Wednesday at a press conference that the current discussion is not only about loans and grants but also about the channels that will be used to disperse the funds. Knops mentioned the government, international organizations with a proven track record in reaching out to people and local non-governmental organizations (NGO’s). “It is about which channels you use for this money to be effective,” Knops said, adding that the outcome of this process will be a mix. In the upcoming weeks the government and the World Bank will take decisions.

Knops was positive about the plans for the new hospital, but did not immediately want to commit to a grant of $25 million to support part of the project. Minister Emil Lee  has been lobbying hard for this grant with the Netherlands.

“We had a good discussion on Wednesday morning in the cabinet about the hospital,” Knops said. “I have always said that having a hospital that meets the standards and can also have a regional function for other islands is essential. It is one of the elements you need in a good infrastructure.”

Knops said that the Netherlands wants a good business plan for the hospital before taking any decisions. “The Netherlands is willing to help but we are not going to fund a huge part of the hospital from the €550 million recovery fund,” he said. “The business case has to be proven and the initiative has to come from St. Maarten.”

The state secretary mildly criticized St. Maarten for how it went about the €7 million that was made available towards the end of last year for low hanging fruit recovery projects. “I was not so happy with the progress during the last month,” he said. ‘We made that money available on December 10 of last year. But I am happy to see that the government is now really taking action. The cooperation is excellent on the level of high ranking civil servants and on the political level as well. We have lots of contacts and I am very positive at the moment.”

The state secretary noted that the Dutch parliament and the cabinet are “very committed” to help the people of St. Maarten after the devastating hurricane. “At the end of November I was here for the first time after the hurricane. I have seen the effect – people having no jobs, houses without roofs and a lot of damages all over the place. It is my commitment on behalf of the Dutch government to help you as soon as possible and to minimize the bureaucracy as much as possible.”

Knops said that the relationship between the Netherlands and St. Maarten has become stronger after the hurricane. In his discussions with the Council of Ministers on Wednesday morning, Knops offered assistance with solving the problem at the landfill.

“I was in Brussels last week and you will go to Brussels soon,” he said to Prime Minister Leona Marlin-Romeo who was sitting next to him during the press conference. “We will try to get funding for this problem. It is a challenge and St. Maarten cannot do it alone. We have to work together.”

Knops commended Marlin-Romeo for indicating that she wants to seek cooperation with the French side. “I was very happy with that signal,” Knops said. “I think that cooperation is necessary considering the scale of the island. It will be historical if we can solve this for St. Maarten.”