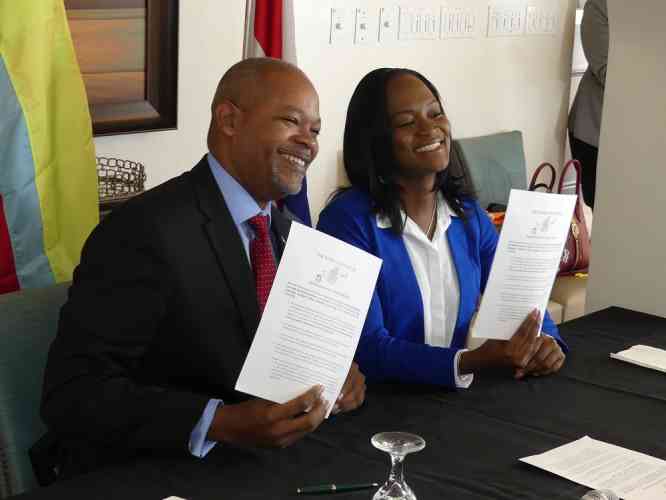 PHILIPSBURG – Minister of Tourism and Economic Affairs Cornelius de Weever signed a memorandum of understanding on Friday morning with the first vice president of the Collectivité of Saint Martin Valérie Damaseau about the joint promotion of St. Maarten as a tourist destination.

The signing ceremony took place at the Infinity restaurant at the Oyster Bay Beach Resort in the presence of among many others, VROMI-Minister Miklos Giterson, Finance Minister Mike Ferrier and Clara Reyes, the newly appointed head of the Culture Department at the Ministry of Education, Culture, Youth and Sport. The interim director of the Tourist Bureau of St. Maarten, Rolando Brison, was not present.

The parties involved in the agreement, the French side Office de Tourisme (of which Damaseau is the director), the St. Maarten Tourist Bureau and the relevant ministries from both sides of the island will work together to create a sustainable tourism masterplan that includes the visions of both sides of the island. The aim is to promote the island as one destination.

The signatories to the agreement will furthermore seek financing and grants from regional and international institutions; they will also pool their public relations and marketing resources and share analytical information. Furthermore, the French and the Dutch side will jointly present themselves at local, regional and international promotion events.

“United we stand, divided we fall,” Damaseau said in a brief speech before the signing of the memorandum. “We want to promote St. Maarten with one voice and as one destination. Visitors see one destination, not two islands. We have to capitalize on the strengths of both sides to promote the island. Let the working together begin.”

Minister De Weever spoke of a historic day. “I am proud to sign off on this agreement for the joint development of our tourism product. United we can achieve a lot.”

De Weever noted that Hurricane Irma did not stop at the border. “Visitors have shown that they have not given up on St. Maarten. We have to join our resources and bring St. Maarten back to the pre-Irma era.”

After the signing, students from the Charlotte Brookson Academy and the National Institute of Arts entertained the guests with dazzling dance and poetry performances.