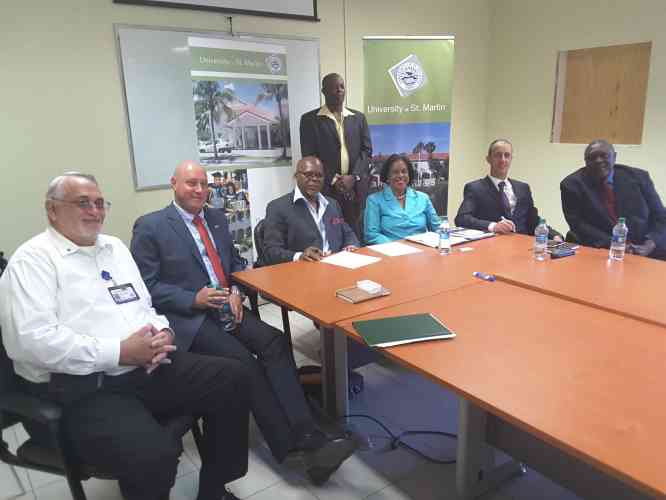 GREAT BAY — The University of St. Martin will be the hub of a series of Cyber Security Trainings courtesy of a strategic partnership between the University, the Caribbean Israel Ventures Inc. (CIVI) and the facilitators of the course, the Mer Group from Isreal.

The Mer Group is one of the world’s leading and groundbreaking cyber security and intelligence companies. It continues to innovate technology and develop training that has become a world standard in cyber security. It has become a publicly traded company since 1992 and is headquartered in Israel. It has 1,200 employees and has 24 global offices.

CIVI is an affiliate of the Caribbean Israel Leadership Coalition (CILC) which has a mission to facilitate closer ties and collaboration between the state of Israel and the Caribbean economically, diplomatically and culturally. The mission of CIVI is to utilize Israel’s technology and investment to strengthen Caribbean nations while increasing bilateral trades between both nations. CIVI’s Economic Liaison for St. Maarten and the Caribbean is Greg Arrindell. He was instrumental in brokering a deal between the university and The Mer Group.

USM and CIVI signed a Memorandum of Understanding (MOU) last week that will see The Mer Group, through the efforts of CIVI, facilitate the courses at USM. CIVI and USM will recruit students for the course with a maximum of 30 students for each cohort. There will be multiple cohorts throughout the year, as the courses will run for four days each time. Students, upon successful completion of the course, will receive an internationally recognized diploma and certification in cyber security, having being trained by one of the world’s most recognized names in cyber security—The Mer Group. The certificates will also have a certified seal from USM, which provides regional and international mileage for the university. The course is open to participants from St. Maarten and the entire Caribbean, considering the vulnerability of the region to cyber-attacks.

At a short ceremony yesterday at USM, officials from USM, CIVI and The Mer Group were present, where they spoke of the significance of this partnership and the course to St. Maarten and the wider Caribbean. Segev Hostik, Director General at The Mer Group regional office in Mexico, highlighted the importance of cyber security to law enforcement, the financial sector and other pertinent infrastructure of St. Maarten and other countries. “The two most attacked sectors in the world are financial institutions and telecom companies (for the last three years). The attacks (vary); from attacking critical infrastructure and government. In the government (hackers) want to get databases and to sell it on the dark net, he explained. “In banking, hackers are looking to steal money…in the telecoms companies hackers are looking for the databases—numbers, credit card numbers to sell on the dark net.” He said the Cyber Security Training will help the students to identify these risks and how to mitigate them.

Uri Bar Yosef, General Manager of MER Global, applauded the partnership with USM through CIVI, and has high anticipation of the outcome of the working relationship. “We feel very honored to come and join with you, sign this contract and be able to come from the other side of the world down here to try and collaborate and share with you what we have learnt over the years with good and very experienced people from Israel,” Yosef said.  “We are very excited to be here.”

Meanwhile USM President Valerie Gitterson-Pantophlet thanked Greg Arrindell, economic Liaison for St. Maarten and the Caribbean for CIVI, for his relentlessness in seeing this partnership come to fruition. “For the University of St. Martin, this is a project, we would never (achieve) if It were not for Mr. Greg Arrindell, with the passion behind of (the project),” Mrs. Gitterson-Pantophlet said.

Mr. Arrindell highlighted the importance of this partnership not only for cyber security, but also the greater benefit of St. Maarten. “There are 800,000 jobs available in the cyber world. If we take each member (of a St. Maarten family), and put them into classes, they would not be able to supply the demand that is out there. And the demand is growing,” Mr. Arrindell said. “You are now sitting in an opportunity where your child, your uncle, you aunt, your nephew, can be part of this enrollment at the university and would be able to start, once graduated, to lobby for jobs that pay minimum $US50,000 to start,” he added.

Also present at Monday’s ceremony were Orlando Wilson, a St. Maarten representative of CIVI, Robert Judd from the Management of Finance section of USM and Clifford Illis, associate of Greg Arrindell were also at the ceremony.

Despite increased improvement in technology in the Caribbean and Latin America, these regions remain highly vulnerable to cyber-attacks. Four out of every five countries in the region do not have a cyber-security strategy or plan for protecting critical infrastructures. Two out of three do not count on command centers and cyber security controls.

The capability and competence of law enforcement, security agencies, and the private sector information technology professionals for defending against cyber-attacks is very low and needs to be developed. According to the report, cybercrime worldwide cost US$575 billion a year which represents 5.5% of the global GDP and in Latin America and the Caribbean. Details on the start of the cyber security training will follow soon.