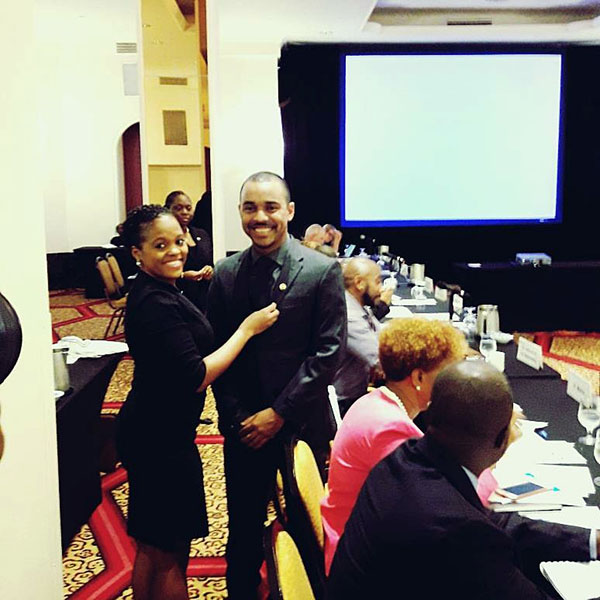 PHILIPSBURG:— Head of the St. Maarten Tourist Bureau Rolando Brison on Wednesday received his Board of Directors pin from the Caribbean Tourism Organization (CTO).

At the CTO Caribbean week meetings in New York, Brison participated in developing the CTO 5 Year Strategic Plan that would lay the framework for how the region should market and develop the product going forward.

The new board director hit the ground running when requesting a motion to have a task force be created to go further into forming a collective opinion of the CTO for the 5-year strategic plan. This motion was passed and Brison invited the work group to St. Maarten to execute the task over a period of 2 to 3 days. The motion was supported by Belize and Turks & Caicos.

“I was very proud to be back at CTO. I was here representing my country as Junior Minister, now I am proudly here as a Director. It is a proud moment to be officially added to the board of directors,” Brison said.

Minister of Tourism Mellissa Arrindell-Doncher congratulated Brison who she said is more than capable of representing St. Maarten as well as engage in discussions that benefit the region.
The Board of Directors of CTO is the highest Executive Body of the Organization and is responsible for the overall direction of the activities and programs of the organization within the policies prescribed by the Council of Ministers & Commissioners.

It comprises the Directors of Tourism representing the Government membership, together with the hotel and other tourism private sector members. The Caribbean Tourism Organization (CTO), with headquarters in Barbados and offices in New York and London, is the Caribbean’s tourism development agency comprising membership of over 30 countries and territories including Dutch, English, French, and Spanish, as well as a myriad of private sector allied members.

The primary objective of the Caribbean Tourism Organization is to provide to and through its members the services and information necessary for the development of sustainable tourism for the economic and social benefit of the Caribbean people.