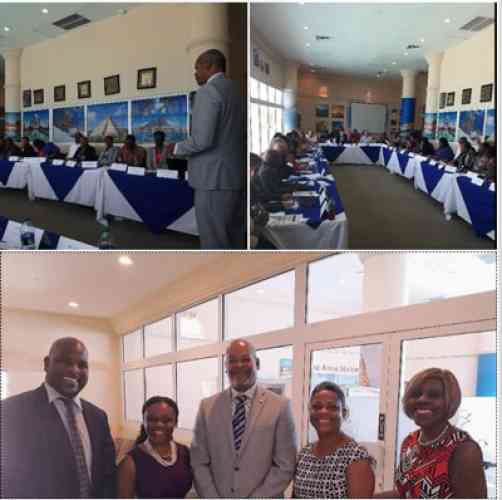 Simpson Bay:—  Acting Minister of Tourism, Economic Affairs, Traffic and Telecommunications (TEATT) the Honorable Cornelius de Weever made the opening remarks at the Tactical Meeting of the Steering Committee and Stakeholder Forum for the COSME program being held at the Simpson Bay Resort on February 14th and 15th 2018.
The minister spoke words of welcome, acknowledging the Project Officer/ Private Sector Specialist of the EU Delegation, Ms. Camille Wildman, Acting Program Manager of the COSME Program Ms. Lizette George, Team Leaders Ms. Diana Hendrickson (GOPA), Mr. Michael Seepersaud (STEINBEIS) and Mr. Huib Poot (ECORYS).
Minister de Weever was thankful for the support the COSME Program has given the Small and Medium Enterprises (SME) Development for our Island and encourages further development and the competitive edge of SMEs for the economy of Sint Maarten. He further welcomed the participants to enjoy our island and encouraged them contribute to our ‘Friendly Island’ during their stay.
The COSME Program was launched on April 1, 2014, on the island of Tortola (BVI) and is slated to close in September 2018. COSME is a 54-month program with the responsibility to disperse €15 million to projects benefitting participating Caribbean territories. The funds were made available by the European Union. The program’s overall objective is to contribute to the sustainable and climate-resilient economic diversification and prosperity of Caribbean OCTs by improving the competitiveness of small and medium-sized enterprises (SMEs) in the participating territories.
The Tactical Meeting amongst key stakeholders and the Steering Committee is aimed at reviewing the achievements made within all the participating OCTs and to discuss the steps going forward as the program nears its completion.