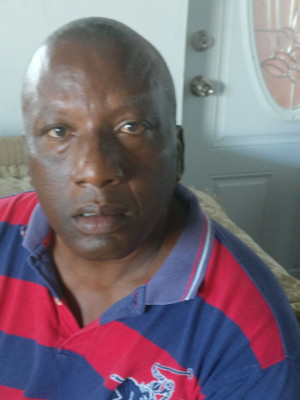 PHILIPSBURG:— Father of Baby Pilanco Oliver Vincent Arrindell told SMN News in an exclusive interview on Thursday that he has had enough with SZV and its employees whom he said is refusing to grant his disabled infant proper care.
Arrindell has been in this predicament since the birth of his son in April 2015. He said that his child is supposed to be undergoing therapy in order for him to live a normal life but since November 2016 his son has not gotten one therapy treatment.
Arrindell said that he was sent to the Netherlands earlier this year and his son did not receive any treatment. He said SZV left him with his wife and son in a hotel room for two long months without proper food for his infant son. “I had to walk very long distances to obtain food for me and my sick son. SZV refused to put me in an apartment, they wanted me to sign out of St. Maarten so the Dutch government would have to shoulder the medical expenses for my son. I am a civil servant working for the Government of St. Maarten and SZV including the Minister of VSA wanted me to sign out here I could lose my job. Can you imagine Minister Lee promised to send my son back to the Netherlands if I sign out of St. Maarten, the Minister told me he would ensure that I am paid two years of my salary and when I told the Minister to send the proposal to my lawyer Shaira Bommel he refused. When I contacted SMN News while in the Netherlands SZV put me in an apartment for one month after that I was brought back to St. Maarten since SZV claimed the child could receive the therapy on St. Maarten.”
Arrindell said that ever since he returned to St. Maarten SZV did not make arrangements for his child to obtain proper care, he explained that he went to every therapeutic clinic on the island and they all told him that they do not provide such care for infants or toddlers under the age of 5. The doctor at SMMC he said told him that SZV wants him to help them destroy the life of a young child by placing the child in the care of the White and Yellow Cross, but the doctor he said told him he will not do that to a young child who could live a normal life if given proper care. Arrindell further explained that his lawyer and doctors wrote several letters to SZV and to date he has not gotten a response from the Social Insurance Bank. Arrindell further explained that he has letters from the Netherlands, Colombia and the Dominican Republic, where they are calling for his child to be seen by the doctors there but SZV chose to ignore him and his child.
When asked about Thursday morning, Arrindell said he saw his child suffering and he decided to go to SZV since they are not responding to his lawyers, he said upon reaching SZV with his child the security guard told him that SZV will open their office at 10:30, Arrindell said he jumped over a counter at SZV and sat on a chair waiting for SZV personnel and it was while sitting there he heard Dennoui screaming and asking what he is doing inside SZV and who he was, he further claimed that when Dennoui approached him he did not hit him but instead tore his clothing up. He admitted that another SZV personnel was choking him and he hit that person who also chose to kick him several times while he was pinned to the ground by a security guard.
Arrindell further explained that the insurance company for SMMC “Bezoekadres” has been in contact with him and they were supposed to compensate him for the damages caused to his son while his wife was giving birth at SMMC but the insurance company he said was supposed to get back to his lawyer in August 2017, he said they asked for an extra month and to date his lawyer and him did not hear from SMMC insurance company.
Arrindell made clear that the only thing he wants is for his son to receive proper care so he could live a normal life like every other child.

PHILIPSBURG:— Social & Health Insurances SZV had to close its doors to the public today (Thursday, November 23rd) due to an unforeseen incident wh, re SZV staff and security were physically attacked by a visiting customer. For privacy and legal reasons, it is not customary for SZV to disclose the details of incidents to the media or public but we see it important at this time to inform that these actions are never tolerated. All incidents where security has been breached are followed by an official police report and when required pursued further by legal action.
It is our duty to serve the community, adhering to the laws of the social and health insurances of which we manage. We aim to do so by offering the best possible service to each customer, at all times. Violence of any form towards or staff or endangering our staff and visitors is never condoned.
Legal action will be pursued in relation to the events of today and for this reason and to maintain the privacy of our staff we will not issue any more details as to not interfere with the ongoing proceedings.
The offices of SZV will re-open again on Friday November 24th during regular business hours; 7:30 a.m. – 3:00 p.m.

PHILIPSBURG:— Police was called Thursday morning on November 23rd at the SZV office, to intervene in a problem between a client and the staff that office. Police spoke to the suspect identified with initials O. A. who stated that for some time now he has been given the “run around” by management and staff of the SZV regarding medical attention and treatment for his physically impaired child.
This morning at the SZV-office the situation got of hand according to the suspect as again he was given the runaround. The situation got heated and broke out into a fight involving the security guard and at least two other employees. The suspect had his child with him during the incident.
The employees along with security-officer that were involved in the incident went to the Detective department and filed official complaints against the suspect for destruction and ill-treatment. Witnesses to the incident also gave statements to the investigating officers. The suspect has not turned himself in or been arrested as yet.
The case is under investigation and no other details are available at this time.