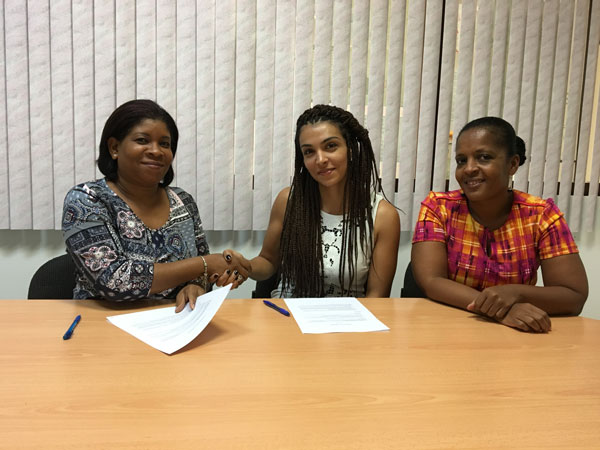 PHILIPSBURG:— The K1 Britannia Foundation and the Court of Guardianship have recently signed an agreement to continue working together for the next 5 years to help vulnerable youths in St. Maarten.

Both parties will continue to cooperate in projects that focus both on children under protective custody and young offenders.

“This is one of the most vulnerable groups of youth on the island. As well as the target group that greatly affects the future of crime on the island” stated Ms. Thirumur.

Projects will include the mentorship program, where K1 encourages persons in the community to become mentors to foster children and young offenders as a way for them to heal and become productive members of society.

Mrs. Rodriguez-Emmanuel elaborated on the focus group “Children who have been physically abused learn that physical abuse is okay, hitting someone is okay because that’s the way to express to them that you don’t like something. Children who have been neglected in the sense that their basic needs are not met — you see a lot of times that these children think it is okay to take things from other people.”

The mentors from K1 Britannia Foundation play a vital role in helping them heal and make the right choices and grow and develop as human beings. Mrs. Emmanuel–Rodriquez continued “It is important to try to teach them new behaviors and that they know there are other options and that you give them other options.”

The ongoing pilot K1 Britannia Work, Training and Social Development (WTSD) Program for foster teenagers and teenagers under probationary measures between the ages of 16 and 18 falls under the scope of this agreement and is much needed.

K1 Britannia also partners with the business community for its Second Chance and Maritime Programs which are geared towards young offenders and foster teenagers, giving them employment opportunities, job training, and apprenticeships in various fields with a focus in the maritime field. “Giving these youth — regardless of their background — the resources, education, and opportunities as teenagers is critical for their development and success later on. Many youth with a criminal record are given no options other than to remain in crime. Without giving these youths a second chance, is it any wonder that the crime rate is increasing in St Maarten, especially amongst teenagers?” said Ms. Thirumur.

Mrs. Rodriguez-Emmanuel emphasized the need for programs such as the WTSD, Second Chance and Maritime Programs saying “It starts with the need to get an opportunity to finalize their education even if its’ a training that is specifically towards carpentry or a hands on training. And then we have the situation of employers wanting to give them an opportunity to work in their environment at least to see the kind of work that can be done and they can get experience and find out what it is that they like.”

Mrs. Rodriguez -Emmanuel continued “The fact that they have persons wanting and wiling to mentor them and guide them through the process not only helps the minor but the employer because then they have the feeling that they’re not just getting a vulnerable youth but they’re getting a vulnerable youth with someone or an organization willing to give them a second chance and the guidance, so it’s not just the employer that has to put all the work into it which makes a big difference.”

All of the programs have the same end goal; giving these youth the healing, love, guidance, tools, resources, education, opportunities and confidence needed in this critical time in their development to overcome the challenges that they’ve been through and become a productive part of St Maarten’s future. All the programs are geared towards long term change which not only changes the trajectory of each youth’s life but also the lives they will change and impact because of these programs.

Ms. Thirumur elaborated on the fact that long term change is what is needed for these youth stating “One of the major problems I believe that exists in St Maarten is the crisis management mentality, where people’s primary focus is on putting a band aid on problems rather than focusing on long-term solutions. What can we do today to solve the problems for the next 5 to 10 years, or even permanently? K1 Britannia Foundation has decided this year that our primary focus is going to be on long-term programs that can help bring long-term solutions to the target groups that we’re involved with helping. We all need to think about the future for youth in St Maarten, and work together to bring concrete sustainable change.”

The K1 Britannia Foundation looks forward to the next 5 years of continued partnership with the Court of Guardianship, as we look to protect and help our vulnerable youth for a better future.