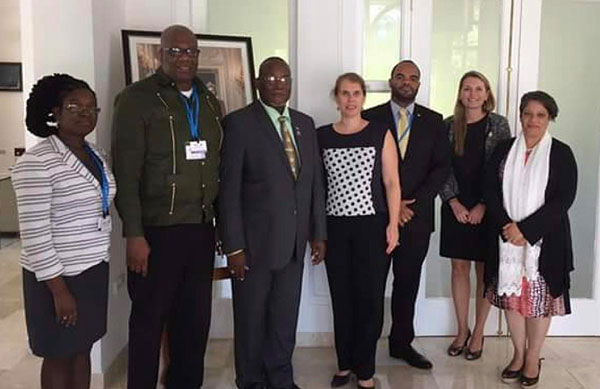 PHILIPSBURG:— In the context of the 22nd Meeting of the Ministerial Council Meeting of the Association of Caribbean States Minister Rafael Boasman was the guest of honor at a luncheon hosted by the Dutch Ambassador in Havana Alexandra Valkenburg for Caribbean Ambassadors.
Minister Boasman reminded the gathering of St. Maarten’s application for Associate Membership within CARICOM and asked the diplomatic representations for the support of their respective governments.
Minister Boasman also echoed Prime Minister William Marlin’s call for increased regional cooperation made during his visit to Havana in June 2016 for the 7th Summit of the Heads of State/Government of the Association of Caribbean States.
Boasman, in his capacity as Minister of Justice and Acting Minister of Tourism and Economic Affairs, highlighted his interests in cooperating in those areas and noted the upcoming visit of the Minister of Education Silveria Jacobs in the area of Education cooperation with Cuba at the end of the month.
In addition, support for St. Maarten’s position as a Small Island Developing State, particularly with regards to funding opportunities was briefly discussed. Minister Boasman was supported by Patrice Gumbs Jr, Senior Policy Advisor for Foreign Relations.