Home Local News The effects the dump fire has on residents. 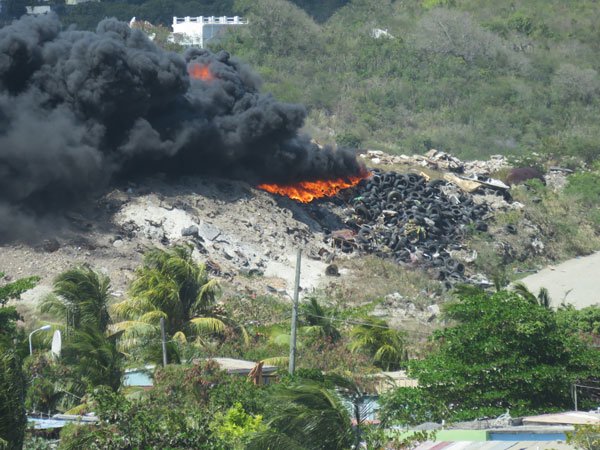 PHILIPSBURG:— The air in Philipsburg, Madame Estate, Over the Pond and surrounding areas are currently being affected by a black smoke plume emitted by the tire fire located on the landfill (dump) on Pond Island.

Tire fires produce smoke, which carries toxic chemicals from the breakdown of synthetic rubber compounds while burning. Keeping this in mind, it is imperative that individuals who reside in the affected areas that suffer from respiratory problems remain indoors with all doors and windows closed. Placing a wet towel in any openings (such as door and window slits) can help prevent any smoke from entering your home. Individuals that have to be outside in the affected areas are advised to wear protective equipment to cover their nose and mouth.

Minister Lee shares the concerns and outrage of the public and expresses the need for this matter to be addressed post-haste. “The way the dump was managed and continues to be managed is clearly not working, posing severe threats to the health of the population. This matter needs to be addressed structurally. This cannot be solved overnight but measures need to be implemented immediately. Minister Emmanuel and I have been discussing a review of protocol for the management of the dump. I have recommended bringing in professionals in landfill management to make recommendations. In the meantime, I urge the population in the affected areas to remain vigilant and take all the necessary steps to ensure that they are safeguarded from the chemicals that are carried in the smoke plume. “

Source: St. Martin News Network
The effects the dump fire has on residents.