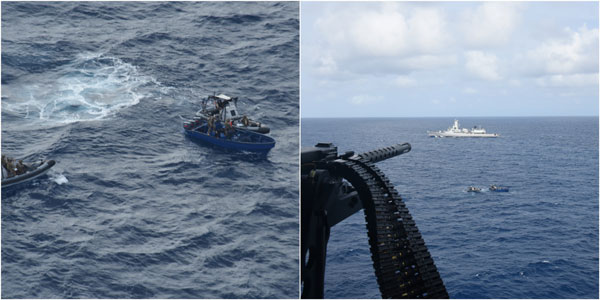 Curaçao:— The Royal Dutch Navy frigate based in the Caribbean, the M-frigate Zr. Ms. Van Amstel intercepted during the night of April 11th to 12th two large shipments of cocaine. Before the first suspects and drugs were transferred to the US Coast Guard, a second smuggling vessel was intercepted. In total, nearly 700 kilograms of cocaine was seized.
During a shooting exercise off the coast of Curaçao, a report came in about a suspicious ship. It turned out to be a quick little motorboat, a so-called “go-fast”. This was at that time located north of the territorial waters of Colombia. Zr. Ms. Van Amstel sailed at full speed towards the specified position, and the NH-90 helicopter aboard was used to locate the ‘go-fast’. Some nautical miles of the vessel the Zr. Ms. Van Amstel launched its two RHIB’s with a boarding team from the US Coast Guard. The NH-90 directed the two RHIB’s to the suspicious vessel. When the RHIB’s were close by suspicious packages were thrown into the sea from the go-fast. By using additional flood lights from the NH-90 these could be found quickly. Ten packages were fished out of the water and aboard the go-fast ‘ three crew members and three additional suspicious packages were found. Since the smuggling vessel was not seaworthy anymore, the crew and their contraband were taken aboard Zr. Ms. Van Amstel. Upon examination, the packages were found to contain cocaine. The total seized amount was approximately 325kg.
Second smuggling vessel
Even before the three crewmen and seized cocaine could be transferred to the US Coast Guard, a new message reached the Coast Guard center. A reconnaissance plane of the Caribbean Coastguard (type Dash-8) informed the Zr.Ms. Van Amstel on the night of 12 on April 13, 2017, of a new suspicious contact. Again, the NH90 maritime combat helicopter was dispatched. The suspicious vessel did not respond to the various stop signals that were transmitted from the helicopter. Warning shots were needed to halt the vessel. Thereafter both RHIB’s and the Law Enforcement Detachment (LEDET) of the US Coast Guard boarded the vessel. 15 bales of cocaine (about 350 kg) were seized. The passengers were arrested and transferred, together with the contraband to a vessel of the U.S. Coast Guard. The Commander of Zr.Ms. Van Amstel, Commander H.J.F. Toebast, said two successful operations were completed within a very short timeframe.