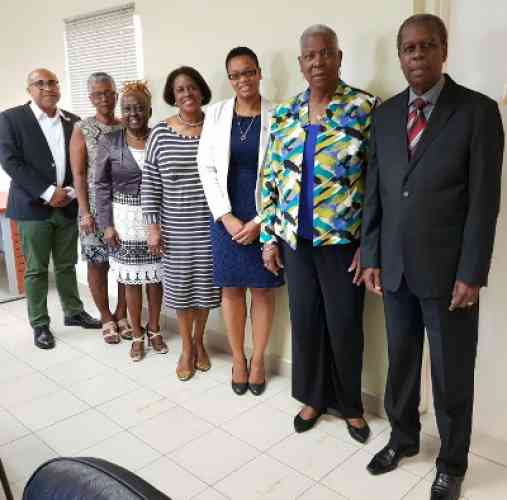 PHILIPSBURG:—- A team of lawyers and concerned citizens paid a courtesy visit to the University of St. Martin (USM) yesterday in hopes of rekindling the decade-long initiative to start a law programme. USM’s administration is hoping to offer law courses co-sponsored by the University of Curaçao in September this year, and consolidate its own undergraduate pre-law programme by January 2018.
“We are getting back to where we left off before Irma and the 2018 Parliamentary elections”, said USM President Dr. Antonio Carmona Báez in reference to the draft MOUs that were meant to be signed by University of Curaçao, the Ministers of Finance and Education, Culture, Youth and Sports Affairs.
Together with the University of St. Maarten Foundation Chair, Mrs. Valerie Giterson-Pantophlet and the University’s recently appointed Dean of Academic Affairs, Dr. Rolinda Carter, Dr. Carmona welcomed the group consisting of longstanding members of the legal community. Among them: Acting Governor Mr. Reynold A. Groeneveldt, Vice-President of the Council of Advice, Mrs. Mavis Brooks-Salmon, Ombudsman Dr. Nilda Arduin, and prominent Attorney Mr. Gaston Bell. Together with Dr. Rhoda Arrindell, Ms. Patricia Philips and former Minister of Finance, Mr. Richard Gibson Sr., this “Law Team” presented a feasibility study to the community in June 2017. Just one week before hurricane Irma made landfall in September, a launching of the law programme under former USM’s president Dr. Francio Guadeloupe was announced in the local media.
“We are waiting for the Minister of Education, Culture, Youth and Sports Affairs and the Minister of Finance to meet with us and give the go-ahead so that we can start marketing the programme as soon as possible”, Dr. Carmona stated as he recalled that “a lot of work and effort was put into preparing for this programme and we hope to execute this project for the benefit of the country St. Maarten.”
The law programme is geared towards preparing individuals interested in a legal career and those serving public office who want to develop their knowledge in the field of law. The course catalogue will include graduate courses in Comparative Law, Dutch Caribbean Law, Criminal Justice in addition to undergraduate courses introducing the principles of Law and Government.