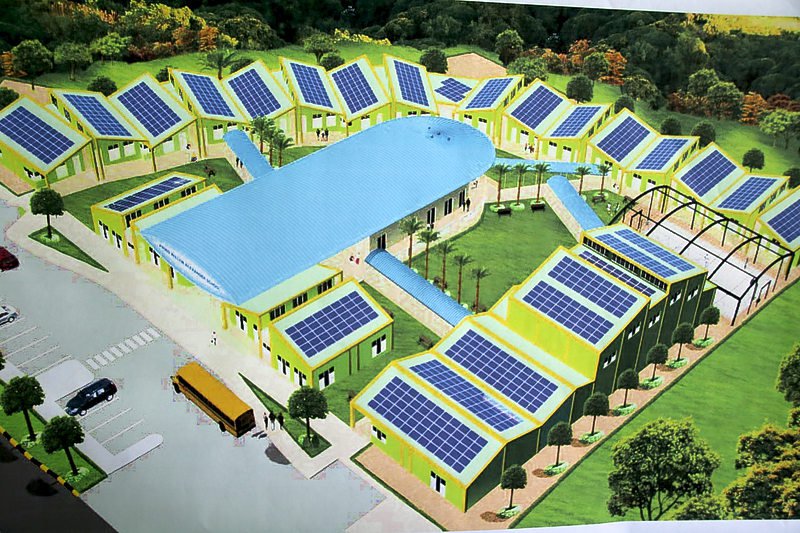 ST. PETERS–During the design and preparation phase of the new Prins Willem-Alexander (PWA) School, it was made known that asbestos might be present in the existing structure, as the school was constructed in the 1970s in a time when the material was used widely around the world.

Head of Government’s New Works Department Kurt Rohan said in a press statement on Wednesday that to prevent taking any risks an asbestos investigation had been commissioned by Government and executed by Royal Haskoning DHV and Sanitas Milieukunding Adviesbureau BV from the Netherlands in March 2015.

The investigation discovered the presence of asbestos in the roof guttering and wall panelling of several classrooms at the school. The specialist from the Netherlands said the asbestos-containing material was non-friable, meaning the asbestos would not be released unless the material containing it was damaged or tampered with as a result of reconstruction or demolition of the structure.

As the contract for the construction of the new Prins Willem-Alexander School has been awarded, it is a condition that the asbestos-containing material be removed prior to any demolition works being carried out at the school. This is a norm that has been upheld and is internationally applied once asbestos has been detected.

A firm that specialises in the removal of asbestos internationally is being assigned by Government and will be specifically flown in to St. Maarten, so the removal and the handling of the asbestos will be done accordingly and in consideration with the logistics in and around the area, taking into consideration the concerns of all parties.

Removal of the asbestos will be done by containment and should take approximately one week to complete. Materials and fibres that have been removed from the school will be transported and shipped for processing to the Netherlands.

Independent Consulting Engineers (ICE) and Royal Haskoning DHV from the Netherlands have been charged with supervision of the asbestos removal on behalf of Government and will be overseen by the Ministries involved as the principals of the project. Once it has been established that the area has been cleared of the asbestos-containing materials, only then will the existing school and its entire structure be demolished.

The contractor, Designer’s Choice NV which was awarded the construction of the new PWA School, in the meantime will be removing small asbestos-free items (doors, windows, toilets, face basins, fans, air-conditioning units, steel grills, etc.) that are in good condition for salvaging, prior to demolition of the structure.

In connection with the continuance of the project, the pupils of the current PWA School have been relocated to Alma Fleming Educational Care Facilities in Belvedere.

Further questions about the procedure and process may be obtained at the Ministry of Public Housing, Spatial Planning, Environment and Infrastructure VROMI Department of New Projects from Project Manager Rena Richardson or Department Head Kurt Ruan at tel. 542-6737.