Home Local News Ras Bushman presents his very first book at Get Up, Stand Up... 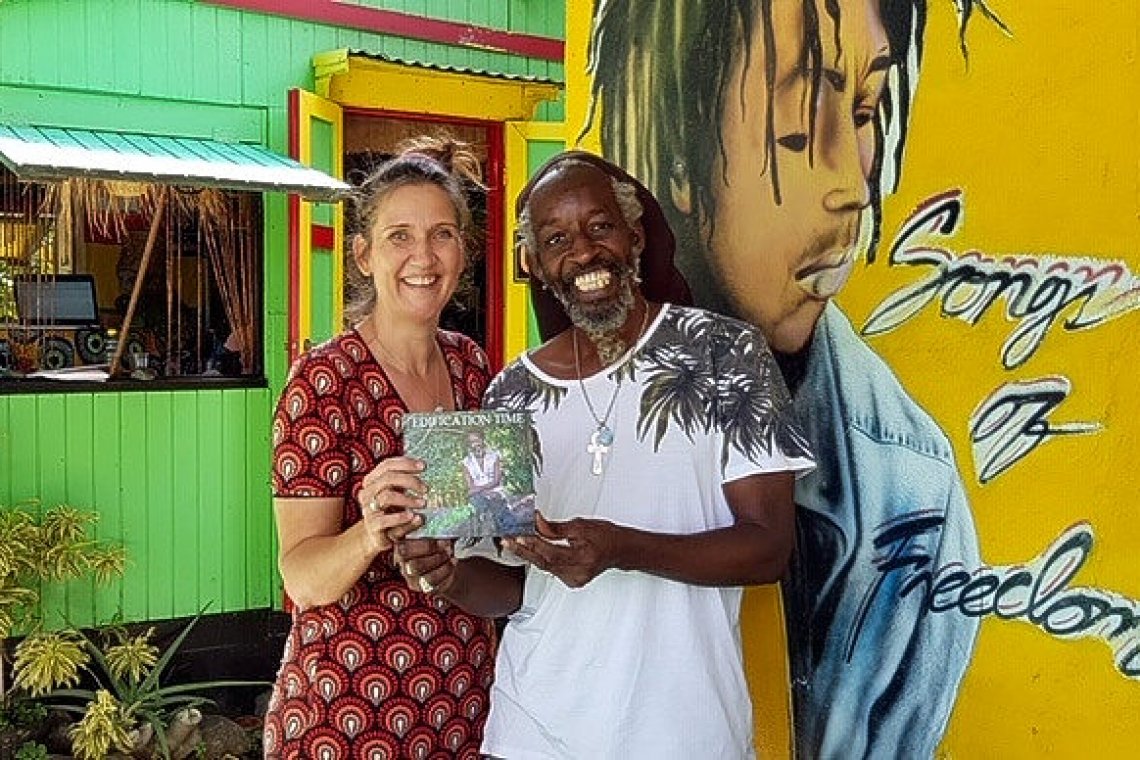 POND ISLAND–The first book with blessings, inspirations, insights, motivations, lessons, poems, deep thoughts, peace and, most of all, words of love from the heart by Roland Joe, better known as Ras Bushman, was launched during the Get Up, Stand Up Festival.

The first two copies of the book were handed over to Prime Minister Silveria Jacobs and to Ky-Mani Marley during the tribute to Bob Marley at the Festival Village on Saturday.

“The book is called Edification Time, as in these times, these are the last days. People don’t know how to feel, how to be positive and live pure. This is the only way to spread the word. Life is about edifying each other – love each other, lift each other,” Ras Bushman said.

He said he had wanted to write a book for a long time, as he had posted his spiritual thoughts on Facebook for years. “I also like to make pictures. And when I met Dirkje de Jong in the Ital Shack, she said it can be done and fulfilled it,” he said.

“Since I went to the Ital Shack with some colleagues in February 2018, I started following Ras Bushman on Facebook,” De Jong explained.

“I always felt happy and inspired when I read his posts, as it really made me think about life. Together with the pictures he posted, the idea for this book popped up in my head. Being an artist and painter, the images started to dance through my brain.

“We spoke about my ideas, Ras Bushman’s ideas for a book about his life and I started working on a first edition. This led to a better understanding of the Rastafari, living Ital, the importance of meditation and to share this legacy with others. With help of my youngest son Guido, who did all the editing, we finalised it in January,” she said.

The book was launched during the tribute concert in honour of the birthday of Robert Nesta Marley on February 6, 1945. The Get Up, Stand Up Festival was organised by Freedom Fighters Musical and Cultural Foundation and featured Bob Marley’s son Ky-Mani Marley as the top act.

Ras Bushman said he felt blessed and grateful for the persons who made his publication possible. Copies of the book are available at Freedom Fighters Ital Shack on Bush Road.