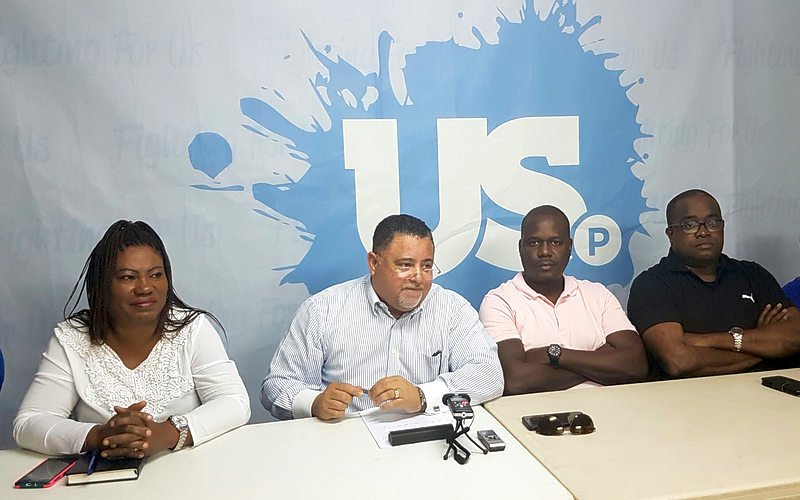 CUL DE SAC–United St. Maarten (US) Party is to put forward a new candidate for vetting for the post of Minister of Tourism, Economic Affairs, Transportation and Telecommunication TEATT. This comes after its first candidate, former party president Cecil Nicholas, was faced with impediments to him taking up a minister’s posting.

A new candidate will be submitted by the party at the latest today, Monday, to Prime Minister William Marlin in his role as formateur of the government.

Party leader Member of Parliament (MP) Frans Richardson announced at a party press conference on Sunday, that he has proposed two candidates to the party board – former MP Maurice Lake and Anna Rabass-Richardson, both were candidates with the party in the 2016 Parliamentary Elections.

The board has also had candidates of their own and conducted interviews with all of them on Sunday. A final decision on the preferred candidate was expected to be made by Richardson and the board on Sunday evening.

The party decided to move ahead with a new candidate because there is no way to challenge the reports of the screening. In the case of Nicholas, the issues were related to the report prepared by the National Security Service VDSM.

Richardson said while Nicholas passed the criminal screening, issues with some member of his household has created a hurdle. Richardson declined to give further details of the impediment, but said the screening process was invasive and covers everyone living or registered at his address.

He noted that the acceptance of the contents of the reports is left up to the Governor and Prime Minister and they can decide to move forward sometimes based on if they like the candidate at all.

The National Alliance (NA) led coalition has discussed the screening regulations and is expected to head to Parliament in the future to have a frank and open discussion.

An issue the party leader said he has “a major concern” about pertaining to the screening is the clearing up of back taxes. The screening requires candidates to not have back taxes, however, when a candidate as in the case of Nicholas clears up his taxes, he is questioned about why this was done at this precise time, Richardson said.

The unfortunate thing, he added, is the clearing of the taxes is used against the candidate in a “technical way.”

Aside from the taxes, Richardson said the screening digs deep into the past of all aspects of the candidate’s life, from business to personal. “We are saying this should not be … A lot of us on St. Maarten will not pass the screening,” he said.

Nicholas said he was honoured to have been nominated to be a minister. The process “required a lot of sacrifice.” Being unable to challenge the “inaccuracies in the report” is “unfair. You should be able to challenge it.”

Richardson said without the possibility of challenge, the details of the report “goes on to haunt you forever.” VDSM does not investigate the information they put in their report to establish whether all is correct, “they just report” on what they are told, he added.

Nicholas had given up not only his post as party president to be screened as minister; he has also stepped away from his companies and has given up his taxi licence. Richardson said Nicholas has not collected a salary or had any income for three months he underwent the screening.

The party has filled the position left vacant by Nicholas’ resignation with new president Agnes Brooks, who was a candidate on the party’s slate in the 2016 Parliamentary Elections. She and new secretary Michael Granger were recently voted onto the board.

Commenting on talk in the community that US Party was not happy in the coalition, Richardson said there was no truth to this and the party has not been in any negotiation with any other political party.

As for the release of the governing programme of the National Alliance/US Party/Democratic Party coalition, Richardson said it will be made public when all ministers are in place, “because we want all ministers on board.”