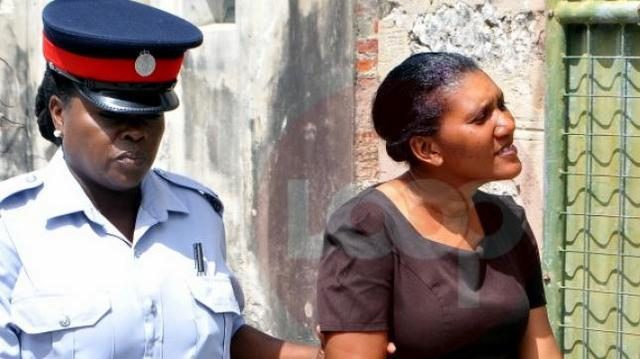 ~ Drama in courtyard as shouting match breaks out. ~

Arielle King has been charged with the unlawful assault on April 28, 2016 of 83-year-old Jasmin Hall, a resident in the nursing home where King worked.

Appearing before Magistrate Kristie Cuffy-Sargeant just before 1 p.m. today, King was released on $3,000 bail, with her mother Yvonne Lorde standing as surety. 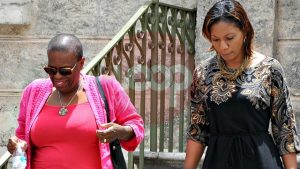 The sole condition of her bail is that she stay away from Hall.

The 37-year-old St. Philip resident is to return to the District C Magistrate’s Court next Monday, May 23.

King was filmed by a co-worker hitting, kicking and mocking Hall. She and another staff member present during the incident were fired and the matter reported to the authorities by the nursing home management.

The footage appeared on social media this week and went viral as it sparked public outrage.

As she left the courtroom accompanied by her mother and attorney, King’s face was covered by a piece of black fabric.

They were joined in the courtyard by a male relative who tried to shield her from the small group of curious onlookers and media personnel.

When one man chided her for covering her face, he and the male relative got into a shouting match, causing a commotion in the courtyard and bringing police and court officers running from the courtroom.

Also present for the court appearance was Hall’s daughter, Barbara Daniel-Goddard, who is a resident counsellor with domestic abuse advocacy group, SAVE Foundation. She was accompanied by its Chairman and Founder, Leisel Daisley. The anti-violence advocate said she was there to lend her support as a colleague and a friend.

Speaking to the media after the hearing, Daniel-Goddard said she was “bitterly disappointed” that the case could not be resolved “in one go”, noting that there was a long wait in court this morning, as well as some running around to get to the right court.

She added, “I am feeling a sense of utter frustration. I am feeling disappointed. The anger which I thought had subsided is slowly rising to the surface so at this moment my desire for vengeance is actually increasing seriously – so on a scale of 0 to 100, I’m actually at 100.”

Hall is a resident of the Roseville Home for the Elderly in Durants, Christ Church, where the accused was previously employed.