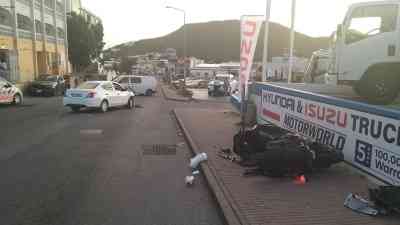 PHILIPSBURG:— The Police Patrol and Ambulance were directed to the roundabout on the A.J.C Brouwers for an accident that had taken place on Thursday morning March 12th, between a vehicle and a scooter.
On the scene the patrol encountered a collision between a white scooter and a gray Chevrolet Colorado, both vehicles had no number plates.
The police patrol noticed that the passenger of a white scooter had a large open wound and was being treated on the scene by the paramedics. The passenger was later transported to the Sint Maarten Medical Center for further treatment.