José Antonio Oliveros Febres-Cordero, owner of the Active Bank of Venezuela has been the focus of judicial investigations for the alleged commission of crimes such as misappropriation, violation of fiduciary rights, fraud, theft, and corruption, among others. Oliveros began his professional career in Banesco, owned by Juan Carlos Escotet, from where he left after alleged fund appropriation operations were involved. In addition, we must remember how his name appeared in the Panama Papers.

At the end of the first decade of the 21st century, Oliveros did not hesitate to boast about the great friendship that united him with Baldo Sansó,

May 12, 2021
0
~ Government sends letter to PM Rutte. ~ PHILIPSBURG: — Prime Minister Silveria Jacobs announced on Wednesday that St. Maarten is yet to receive the...

May 12, 2021
0
~ Coalition partners disagree, PM seeking legal advice on the appointment of SBOD members.~ PHILIPSBURG:—Information reaching SMN News states that the Prime Minister of St. Maarten Silveria Jacobs has threatened to suspend or either fire the managing director of Princess...
Read more 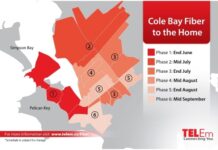 The VMT decides to put the interval between doses back to three weeks and...